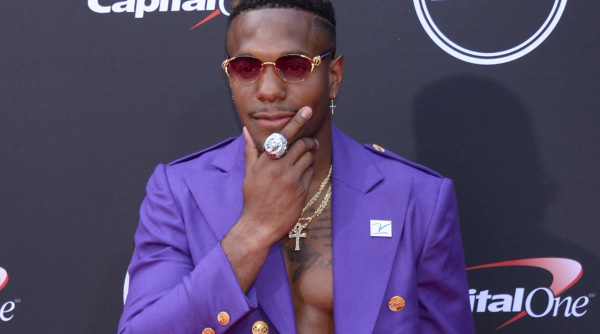 At the 2018 ESPY Awards, gone was the basic black suit — at least, for the most part. Instead, men opted for daring styles that stood out.

JaVale McGee stood out in a pair of rose-patterned pants with a matching suit jacket. The Los Angeles Lakers star accessorized with a trendy red Gucci fanny pack and dark sunglasses, completing his look with black velvety slippers.

McGee was not the only Lakers star to make a splash on the red carpet style. Kyle Kuzma rejected the standard black tux jacket in favor of a teal, snakeskin-print. The basketball player went simple with his footwear, choosing shiny black shoes.

Another of McGee and Kuzma’s teammates, Josh Hart, made a bold statement with his footwear, keeping his attire simple in an all-black look consisting of a patterned jacket, fitted trousers and a black dress shirt. Hart completed his look with embellished black slippers that added a pop to his otherwise monochrome outfit.

Of course, Lakers stars were not the only men to experiment with their looks at this year’s ESPY Awards.

McLeod’s teammate Jalen Mills chose a similarly daring look. Like McLeod, he opted for no shirt, flaunting his abs in a red three-piece suit that he paired with matching shoes. Mills accessorized with oversized sunglasses and dyed his usually dark hair a bright Eagles green.

Click through the gallery to see more men at the ESPYs.